If there was an award for best first line of 2016, Viral would definitely be the winner – I won’t repeat it here but it’s certainly not one to show your Great Aunt Ermintrude. Although if Auntie E was to keep reading, she’d find an eye-opening tale about the modern world and the traps it sets for young people.

It’s about the hypocrisy surrounding young women and sex

Su and Leah are sisters and naturally their parents put them into pigeonholes – Su is the good one, studious, neat and considerate. Leah is the irresponsible, selfish one.

But when the girls both go on holiday to Magaluf, Su is the one who finds herself starring in a drunken sex video which goes viral and blows her entire life apart. Disgraced and ashamed, Su flees and tries to lose herself in Spain leaving the rest of the family to face the consequences at home in Scotland.

The makers of Broadchurch have acquired the TV rights to this one, and it’s being hotly tipped, so the book stands a good chance of going viral itself – and it is a compelling look at what happens when an ordinary person makes a drunken mistake that just happens to make it onto YouTube. It’s about the hypocrisy surrounding women and sex and about what holds families together when something like this happens. 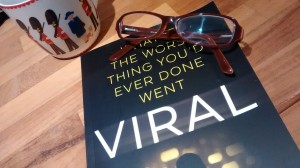 It’s a short book, tightly focused on the events of just a few days (with the occasional flashback) and the characters are real and loveable – especially Leah, the immature bully who finds more strength than she expected. However, don’t come to this expecting a crimey, thrillery read – the darkness just isn’t there. Fitzgerald has too much affection for her characters – and chances are you will too.

So it’s not Gone Girl. It’s a family drama, a coming-of-age tale and a wry look at the weirdness of our society. Enjoy it for that, and it definitely won’t disappoint.

Viral by Helen Fitzgerald is out 2nd February