So if the first half of National Novel Writing Month was solid but less than stellar, the second half was a disaster. The cold just would not quit and morphed into the kind of hideous fluey thing that leaves you just about able to function but unable to enjoy anything.

I spent over a week unable to breathe through my nose, waking every half hour overnight, gulping water, falling back asleep again. I didn’t go to the write-in, my head felt too dizzy. I still worked on the novel but I stopped counting words, ceased updating my progress on the NaNo website and I have no idea if what I wrote was any good.

By the end of the month I was still sick and felt dejected. Even after setting myself these goals I’d blown it. My manuscript was covered with scribbles and corrections (one thing you still can do when you’re ill is mark up a page) and by the end of it there was even more work to do than there had been before I started. Layers of characterisation to add, description to expand on and most importantly an enormous amount of research to do before I tackled certain sections. This whole state of mind is made worse by the fact that next year’s hot psychological thrillers were arriving on my doorstep almost daily.

Example after example of great writing, plotting and brilliantly drawn characters. You can’t do this. You can never be this good. Even the bad ones were depressing because they still felt better than what I had.

It’s like I’m watching a movie of my life and have accidentally paused it in the middle of the montage section. You know, the part where some motivating kick-ass 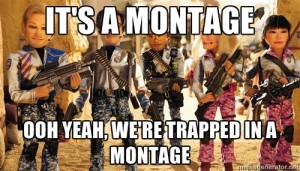 music plays and you see clips of the main character learning kung-fu or a dance routine or becoming a shit-hot lawyer after reading a few books.

It’s a way of making the boring process of hard work look cool and interesting and not actually that hard at all. The politically incorrect nightmare of a film, Team America: World Police sums it up best here. I think I’m trapped in the 55th second of this particular montage – just past the bit where I can barely lift the weight, but not yet at the part where I can karate kick my chainsmoking mentor to the ground.

When this is all done, you can flick through these blog entries really quickly and it might have the same effect. Or I might just be stuck on second 55 forever. Who knows…