No, they didn’t. They weren’t thinking about my future career success, net income and social media profile. They just wanted to raise kids who were decent human beings and knew how to behave in public.

Now of course we know that niceness is an insidious poison that destroys careers – especially if you are a woman. Niceness is what makes you share your ideas with people who promptly steal them. It’s what makes you offer a leg-up to a new intern who then guns for your job. It’s what makes you punctuate every email with the words ‘just’ and ‘sorry’ and ‘I hope’ – the literary equivalent of the physical cringe – making yourself as small and non-threatening as possible.

Former Google exec and entrepreneur Ellen Petry Leanse first noticed the problem with ‘just’ and posted about it on LinkedIn earlier this year causing a chorus of agreement from women in tough professions everywhere.

Yes, many of us are guilty of niceness. We put ourselves forward to help more than our male colleagues. We try to solve problems that aren’t our own, we share too much and apologise too often. According to Lois Frankel’s Nice Girls Don’t Get The Corner Office we’re our own worst enemies, especially when niceness slides all to easily into self-deprecating. Sorry to disturb… It’s only little me… I hope you don’t mind me asking but… 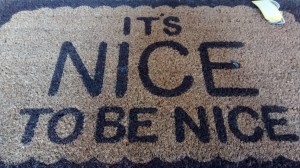 I can see it in my own career, in every email I send. Even writing this blog I try to look at things from every perspective and in an effort to stay fair I end up equivocating and sometimes not even publishing for fear of upsetting somebody.

So niceness has truly hampered my career. Without it I’d have shoved myself into the limelight; written a few in-your-face columns and acerbic tweets about how I hate x, y and z; made people laugh, pissed people off and got a tasty book deal out of it.

Hell, I could be Caitlin Moran by now*. Well, if I honed my writing a bit and said FUCK more.

Nice has definitely held me back.

It’s the subtitle of Frankel’s book that bothers me: Unconscious mistakes women make that sabotages their careers. Oh that’s right – silly little women making mistakes again. That huge, colossal howler of being ourselves and expecting everyone to respect that.

Silly little women making mistakes again. That huge, colossal howler of being ourselves

The assumption is that men are more successful because they’re less nice, rather than because the system is set up for them and women somehow have to operate within it. We’re the ones who have to police our emails, our actions and thoughts. To become someone different in order to reach our goals.

But niceness has helped my career too, in countless ways. No intern has ever tried to steal my job (this is reality, not a Hollywood script) but I’ve pointed plenty of talented ones in the direction of job vacancies and put in a good word. The result? Happy ex-interns who got their first job in journalism through me. This gave me a warm fuzzy feeling – and then a few years later some warm fuzzy commissions.

I’ve generally tried to be a pleasant, approachable boss – even when there are difficult decisions to be made and sheer corporate insanity to be justified. Which means I now have a bunch of ex employees/friends who think of me as a decent human being and who are now editors. In fact one of the nicest women I know just took up a job as editor of one of a hugely successful magazine. Not that she’s a softie – I’m sure she’ll kick ass, but it’ll be the right asses at the right time.

And as for my job itself: a huge part of it is about getting to people to talk. Unless you’re grilling a politician, the interviewer’s role is to fade into the background, to enable people to express themselves, teasing details out of them that even they didn’t know until they started talking. And the first challenge is to get them to feel comfortable and in control.

That’s when ‘just’ becomes powerful. Just one more question… Just asking… Sorry, I know this is hard for you but could you tell me…

If any men out there would like a course in how to be self deprecating and get what you want, I’m happy to teach you. It’s only £3,000 for the day, including biscuits and coffee.

It’s not just journalism either. Across the country millions of women are succeeding in their careers by exercising empathy, caring about what they do and not being afraid to show it. Some of them are undervalued and underpaid but there are those who really do get the corner office. And when the email goes round announcing their promotion everyone sighs with relief that the job didn’t go to an over-assertive wanker.

The trick is to draw the line between nice and pushover. To treat people as human beings who need positive motivation one day and a kick up the bum the next. To know what you want and communicate it honestly but politely. The trick is not to change who you are for some stupid job title – ‘just’ be yourself.

* I am not alleging that Caitlin Moran isn’t nice – from what I hear, she is. But she’s not afraid to trample on a few toes to get her point across. **

** See? I can’t even make a throwaway comment about an uber successful journalist who will likely neither read this blog nor care without adding a placatory footnote. Pathetic. Or Nice. You decide.