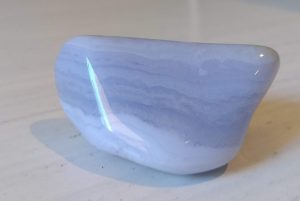 The actual crystal – not sure if it has aided communication but I’m quite attached to it.

Since then I’ve done too many real life interviews to count – I’ve spoken to Elvis impersonators, shagging DJs, lifesaving surgeons, campaigning mums and survivors of domestic abuse. And before each one I’m still nervous. Because until you pick up the phone you have no idea what sort of person you’ll be speaking to. However experienced an interviewer you are, each individual is unknown territory.

And then it’s up to me – the interviewer – to tread the path between what the editor wants, what the interviewee thinks their story is and the truth of the story itself. Get it right and everyone will be happy. Getting it wrong is unthinkable.

Over the years I’ve come up with a few rules to cling to as I head into this wild, wild west situation, so here’s a rough guide from a true life hack…

What makes a story come to life is the characters in it – how did they spend Saturday nights? What’s their favourite takeaway? What makes them laugh? Those are the details which, if cleverly woven in, make a person seem more real, gets the reader rooting for them. So before you jump into the narrative – the when, where how of what happened, take some time to ask about the people involved and what they are like.

Carry the details through

As you gather these details, squirrel them away in your mind and bring them up again later. One young woman I interviewed used to love watching The 100 with her father. Later, when she was struggling to talk about how it felt after he passed away I had some tangible questions to ask her. What was it like watching the show without him? How did it feel to hear his favourite song, watch his football team win? These sound like cruel questions but people respond well to them – it’s difficult to express grief but this gives them a framework for doing it and prompts new stories to come into their minds. That kind of detail also makes it feel more real for the readers without having to resort to cliches.

Avoid talking about yourself

Except in the rarest of cases, this kills the conversation stone dead – especially with celebrities. It’s fine to say something like “oh yes, I’ve got two kids as well, they can be a right handful, can’t they?” But once you start regaling them with tales of Little Johnny’s behavioural issues it changes the dynamic of the chat and leaves the interviewee floundering.

When people are describing something you can both get swept away on the narrative, then when you go to write it up you realise you’re missing a vital detail. “Then he threw a knife at me,” she says. You’re so shocked and sympathetic that you forget to ask where he got the knife from, whether it was a big scary carving knife or a butter knife, where it landed. Sometimes you have to break the flow to ask this crappy, horrible, unpleasant stuff. If you can’t break the flow, write a note to yourself to ask about it later in the conversation. No, it’s not nice but if you’re going to write a true reflection of what happened you have to know where things are.

The same goes for when things happen. Before you write a feature create a timeline of events and fill it in as you go – then refer back to it when you’re writing.

I shouldn’t even have to mention this, but I will. There are about eight different ways to spell Tracy. 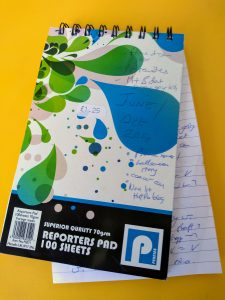 If this was a proper blog, this would be a beautiful handmade notepad with a unicorn pen.

Check your voice recorder. Then check it again.

Once my voice recorder ran out of battery half way through an interview with Julie Walters. It was one of the most mortifying moments of my life – to the extent that I’m ashamed to even admit it here, years later. Sure, I have shorthand but I find my notes don’t capture the nuance of the conversation as well, and it’s a bitch to decipher. The PR had to record the rest of the chat on her iPhone and email it over to me – I was so embarrassed I never told anyone in the office what happened. Since then before every interview I’ve checked the battery life and available memory on my trusty Olympus.

Get some playback software

Words cannot express how much I hate transcribing, speech-to-text software is hilariously bad and most commissions don’t pay well enough to pay a transcriber. So recently I downloaded some playback software to my computer. It’s not perfect but it allows you to slow down, speed up and play back small sections over and over until you’ve figured out what that vital mumbled word actually was.

This person might have done things you would never consider doing in a million years. He or she might live a life you disapprove of or disagree with or just don’t get. None of that matters. It’s up to you to get into their heads and understand why they got that tattoo of Donald Trump on their face. In my day-to-day life almost everyone I meet in real life looks like me, thinks like me and often agrees with me so it’s good to see things from a different point of view and get the chance to meet some amazing people I’d never otherwise talk to. And I get paid for it too! Result.