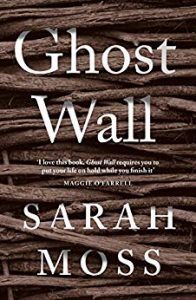 Over a thousand years ago out in the Northumberland countryside a girl was sacrificed: kicked, beaten, tortured and finally buried in the bog by her family, her friends and the people she had grown up with. How could a community turn on someone like that, and why?

This eerie scene leads us into Ghost Wall by Sarah Moss – and the presence of the Bog Girl haunts every page, even as we jump forward into the 1990s.

Why anyone would voluntarily live an Iron Age life is a mystery but a small group of enthusiasts is spending the summer doing just that, camped out on the moors hunting and gathering. The Professor and his students are doing it in the name of research, Silvie’s amateur history-buff father Bill does it to fuel his obsession with the Iron Age and Silvie and her mother are doing it because they do whatever Bill tells them or they’ll pay the price.

Bill dominates his family, just as he believes a prehistoric patriarch would and as the little community divides and violent undercurrents emerge, Silvie is torn between loyalty to him and the growing need to break free.

Every word has been carefully chosen

The unnerving link between Silvie and the Bog Girl adds a darkness and sense of anticipation which pulls the reader deep into the story. Sarah Moss’ lyrical writing is silky smooth – the novel is short and every word has been carefully chosen. The lack of quotation marks can make the dialogue a bit difficult to follow, though.

Despite the blurb this isn’t a twisty thriller or a horror novel. Instead it’s punching at bigger themes: domestic abuse, teenage identity and even class issues (part of Bill’s rage springs from resentment – as a working class man he’s patronised and has never been free to pursue his passion for history.)

But at the centre of this book is a bigger question. How many steps away are we from the kind of savagery and superstition which killed Bog Girl? And will Silvie follow in her muddy footsteps, thousands of years after? A disturbing, offbeat and haunting story.

Ghost Wall is out now.