Set in the 1980s and the present day, The Chalk Man is one of my top thriller picks in a 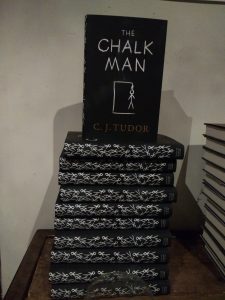 month teeming with twisty tales. It’s a brilliantly original idea: in the 1980s a gang of kids use chalk figures to communicate with each other. It’s all innocent, although somewhat creepy-looking fun until the day the chalk figures lead them to a body hidden in the woods. Thirty years later the gang has moved on, but has to confront the past when the figures start appearing again…

It’s a killer hook and debut author CJ Tudor has woven a confident, evocative story with great characters and a Stephen King-esque feel to it. It helps if, like me, you grew up in the 80s and have fond memories of Buckaroo, The Goonies and BMX bikes but readers of any age will relate to that feeling of being a child, yearning for adventure and stressing about how much your friends really like you.

There are a few chinks in the tightly-plotted armour but it’s such an absorbing, exciting story that I was completely carried away. Definitely worth reading. I’ve also heard great things about her next novel – involving an eerie abandoned mine in the North of England. 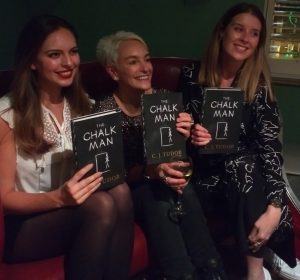 So I was thrilled to venture out of my writing and reviewing cave to attend the book launch last night. It really is great to see a debut author so blown away by the response to her book and to learn that her love of the 1980s is very passionate and real – after five minutes chatting to her I was desperate to go off and rent The Lost Boys again.

Her story is also an inspiration to aspiring novelists everywhere. Caz was running a dog-walking business when she was inspired by her daughter Betty’s chalk drawings on their driveway. As she played fetch and scooped poop, the plot refined itself in her head.

It wasn’t her first attempt at a book – she’d been writing on and off for 10 years and that practice really shows in her writing – her agent admitted she was blown away at the first reading and it went onto become the agency’s fastest-selling debut. The book has already been sold across the world in multiple languages.

So although the book has an unnerving atmosphere, the scene at the launch venue, The Driver pub in North London, was celebratory and full of hope and excitement. I’m looking forward to seeing what CJ Tudor does next.

The Chalk Man by CJ Tudor is out now 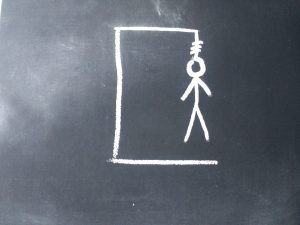 To look at this blog anyone would think that all I ever do is go to maritime-themed book launches. A mere two weeks after attending the Tenacity launch on a submarine, there I was walking up the gangplank of the Royal Princess, a luxurious cruise liner on Southampton docks for the launch of Chrissie Manby’s latest book, A Proper Family Adventure.

It has a wonderful streak of warmth and affection running through it.

Actually I wasn’t walking, I was limping. I had some crazy idea that a cruise ship required glamorous footwear and had forced my feet into a pair of insanely high heels. Note to self: deck shoes next time. They’re called that for a reason.

Still, apart from the ocean-wave aspect the two book-launch vessels couldn’t have been more different. There were no cramped living quarters here and no steampunk cranks and tubes. Instead think luxurious marble trims, glistening chandeliers and sweeping staircases. The ship was enormous – 19 decks catering for 3,560 guests (we all goggled in amazement when the chef told us they get through 40,000 eggs on each trip.) Facilities include a kids club, a spa and a “movies under the stars” screen on the main deck.

Check out the spangly ship, and the lovely Chrissie. 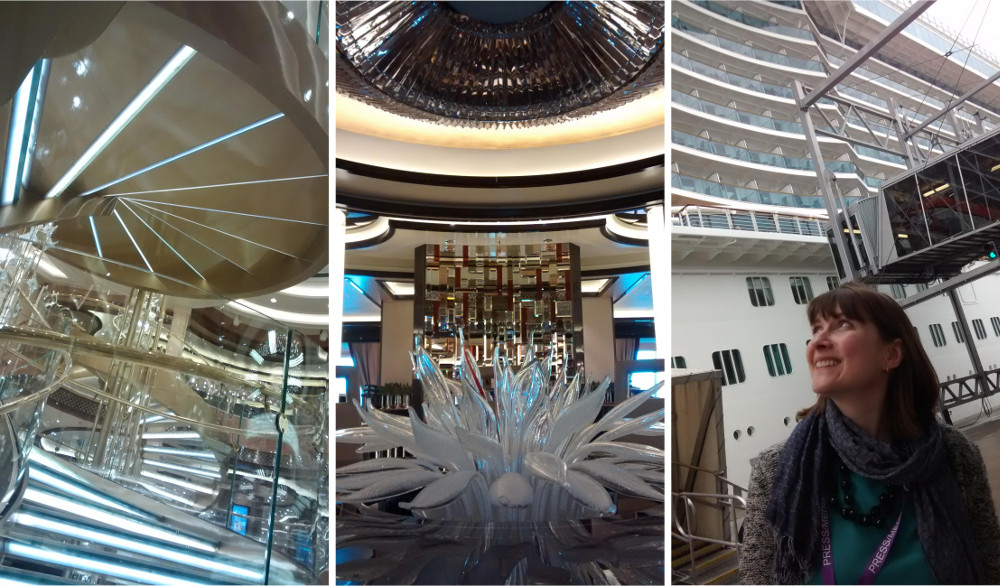 Unlike Chrissie, who’s fantasised about going on a cruise for years, I’ve never really fancied it. But after my tour (and now I have a small toddly person in my life, which means the words “kids’ club” have a magical power over me) I could definitely see the appeal of being ferried around the world and dropped off in interesting places. The only thing that spoiled the magic of the day was the weather. Put it this way… this is what the sun deck looks like when the ship is sailing the Med:

And this is what the main deck looked like during our visit: 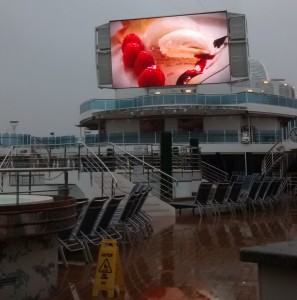 Still the fabulous company and three course meal at Sabatini’s restaurant soon gave us that cushioned-in-luxury feeling you should always get on a cruise.

It was a great scene-setter for A Proper Family Adventure, which is Chrissie’s third book about the loveable, chaotic Benson clan. This time Granddad “I’ve won the bloomin’ lottery” Bill actually wins the bloomin’ lottery and takes the clan on a Mediterranean cruise to celebrate. Like all the Family books it’s funny and has such a wonderful streak of warmth and affection running through it. It’s a pleasure to read and makes you want to rush back to your hometown and hug your own family. You can read my rundown of it on the Cosmo Summer Reads page.

This is probably my last nautical themed book launch for a while (unless there are any yacht invitations out there… anyone?) but more book reviews on the way, I promise.

A Proper Family Adventure is out now.

And for better cruise-porn pictures and detail than I could ever provide, try Princess Cruises.

PS: here’s a glimpse of the shoes, looking down at the water on the ship’s famous SeaWalk deck. Ow. Ow. Ow.