Last week a publisher tweeted me to ask if I was interested in seeing a self-help book called Walking On Sunshine, and the tweet kind of went viral. I mean, not crazy-viral like that story about the stripper going to Florida, but a bit infectious. Think common cold rather than Ebola. My phone blinking in the middle of the night with news that yet another person in the States had seen it and thought – awesome!

This doesn’t usually happen with book related news but it does when the tweet includes a photo of Twitter-catnip Harry Styles reading a copy of said book.

I KNOW! Amazing or what?!?! Some of the comments from fans were really sweet, so chuffed to see their hero relaxing with a good read.

Although if I’m honest he could look a teeny bit more cheerful about it – but maybe I’m just being fussy. 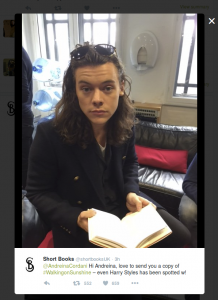 At first it was kind of exciting. I’ve known for ages that I probably have to build up my Twitter profile a bit, and now my name was spreading across the planet like an infectious disease. Surely it was a matter of time before I started reaping the rewards. And sure, all those 1D fans would be a bit disappointed about the lack of Harry in my day to day tweeting life but some of them might just stay for the craic…

And then, nothing happened. More likes, more favourites but, over that first frenzied 48 hours, I actually lost four followers.

It underlined how much Twitter has changed over the past few years. Back when I joined in 2010 I got followers if I so much as sneezed. But more importantly it used to be about the banter. I remember lots of late night chats with a science dude about the guilty pleasure movie that is The Scorpion King, there was another guy with a quintessentially British sense of humour who always had a funny comeback for everything I tweeted.

Then I took two years off Twitter for work reasons, and somehow I got hopelessly left behind. By the time I went freelance and returned to my old tweeting ways my former pals now had so many followers my voice was completely lost among them – during those two years they went from being nearly-friends to minor celebrities.

Retweets are incredibly rare and the only way to increase your network is by following people and hoping they follow you back. I duly did so, adding lots of interesting people to my list, but the result is that my news feed is a long list of strange faces and mysterious links rather than  cosy group of friends.

Now it’s all about getting software to manage who you follow, to automatically unfollow someone who doesn’t follow you back because it affects your “reach”. If you don’t do this, Twitter essentially, auto-brands you a Big Fat Loser. So instead of being a fun thing to do it’s become a way of measuring yourself and the imprint you make in the world. For example, I recently heard about an author whose book was rejected by a publisher on the basis that, with a mere 2,000 or so followers, her reach was too small.

Going on that, I am a pipsqueak that probably couldn’t even get a magazine down off a shelf.

It’s kind of sad but the truth is that, unless you’re a comedy account like @shitmydadsays or @50ShedsofGrey, people don’t follow you for the laughs any more, they follow because of what you can offer them. So when I was a commissioning editor, freelancers followed me. And now I’m a book reviewer, book publicists follow me. Mighty entertaining and informative they are too, but it’s still all about work.

I cherish the non work-related people I’ve come across – glimpses into different worlds like @theonlyspoon. He’s a PUPPETEER – coolest job ever! And I love tweeters who go out of their way to entertain, like @Joannechocolat‘s #10tweetsabout… and #storytime. Even better are the real friends – the ones I know offline and the fellow freelancers from online community I belong to. We recently held a Social Media Monday where we all followed each other and sent supportive messages. It felt good to be part of a community again – and also for some of my notifications to be non-Styles related for a change.

I miss the rawness of it, though. The fact you could go online on a Sunday night, talk about what’s on TV and find a bunch of kindred spirits you never knew existed. I’m aware that makes me sound like my nan talking about the good old days of the jitterbug but hey, it comes to us all. Perhaps I should give Snapchat a try instead?

It’s all pretty depressing but on the bright side, I can always cheer myself up by reading Walking On Sunshine which is actually quite a fun little book with cartoons and bitesize tips on how to brighten up your day. It’s out now and comes under recommendation from Harry Styles. 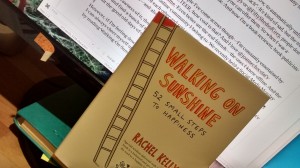 PS: And here’s a review of Viral by Helen Fitzgerald, just for the tenuous link of it…