Two years ago, when I set up this blog all bright eyed and full of enthusiasm, I wrote about the Arvon course I attended and how great it was to meet like-minded writers, discuss our characters, plot and story arcs etc. But while we were having all these lovely big chats there was one guy who ducked out of most of our sessions, who didn’t want to join in with our dialogue workshops and storyline exercises. You’d stumble on him tucked in one or other cosy corner of the beautiful Lumb Bank Centre, hunched over his laptop hammering the keys. “Can’t talk now, I’m writing…”

Unlike most of us he was near the end of his project and you could almost see the waves of determination coming off him. I wasn’t surprised to hear that he’d landed one of the top agents in the biz, that there had been a bidding war for his first manuscript. The guy was called James Law and last week I went to the launch of his first novel, Tenacity. The name really couldn’t have been more appropriate.

you could almost see the waves of determination coming off him

It’s a dark, claustrophobic crime novel set on a submarine – James spent years on subs, so there’s lots of naval detail. It follows the story of a lone female investigator trapped with a hostile all-male crew, one of whom might just be a killer… 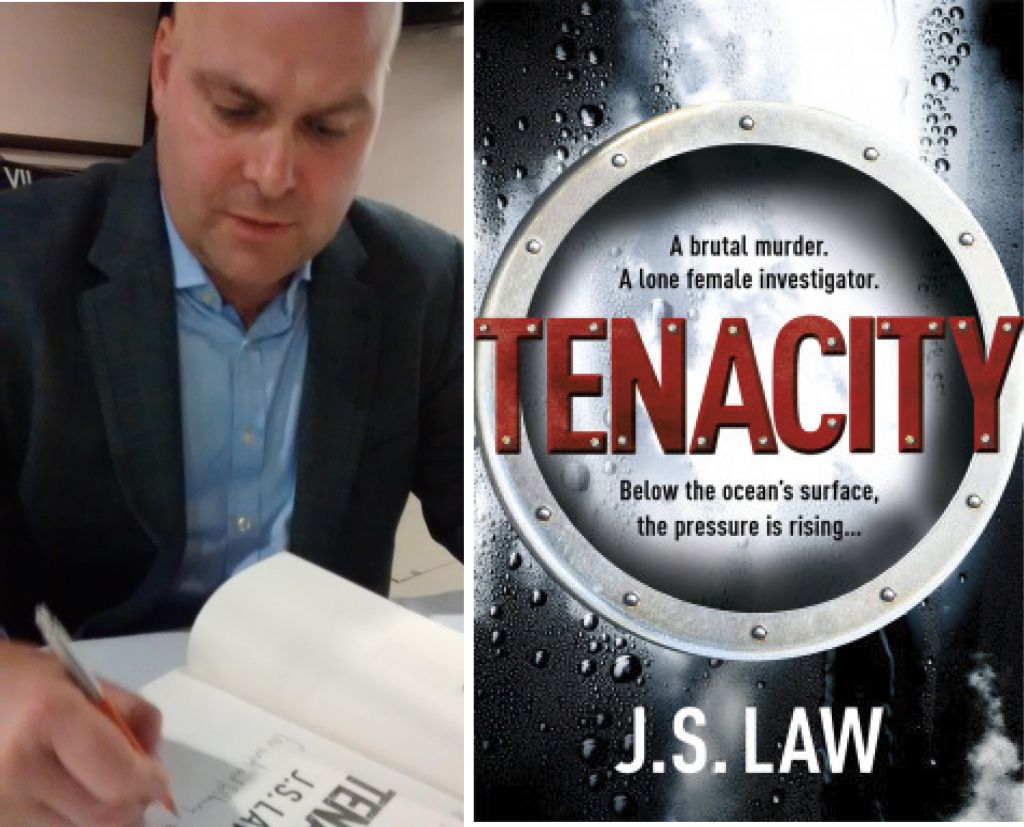 At Arvon James waxed lyrical about the addictive action of the Millennium trilogy. And while I’m not a fan of Stieg Larsson’s waffly prose and the graphic violence against women James has dodged both of those Larsson traits while piling on the tension, suspense and secrets. I’m only about half way through so I don’t know the end yet, but as Tenacity is the first in a series I’m guessing that naval investigator Danielle “Dan” Lewis makes it through.

The launch was fabulously nautical – at the Royal Navy Submarine Museum in Gosport. There were speeches, readings and a genuine vintage sub to explore. I went crazy taking close-up pictures of pipes, taps and dials – it was like some kind of steampunk nightmare, hard to imagine that dozens of sailors lived amidst all this for months at a time. And you know what? Even though it was decommissioned years ago it was still a bit whiffy. The crowd was an interesting mix of writers, journalists and James’ naval buddies. Unsurprisingly, the wine flowed.

I came away with a signed copy, which I hope will be the first in my collection of Arvon alumni publications. I also felt fired up for the first time in ages. James finished his book, which is achievement enough, but then he had enough confidence in it to shout about it and grab the publishing world’s attention. Instead of emailing his MS off into the abyss and crossing his fingers he created a military-style plan of attack with the clear objective of getting the publishing deal he wanted – and it worked.

This business is all about talent and hard work but without confidence it all just sits there mouldering away on your Dropbox.

Time to start shouting, I think.