TifAni can’t wait to marry her cookie-cutter Perfect Boyfriend. So why is it that, in the very first scene of Luckiest Girl Alive she is fantasising about stabbing him with their carefully chosen designer wedding cutlery?

It could be because – whisper it – she can be a bit of a cow. In fact, there is lots that will irritate you about TiFani FaNelli. Her snobbery, which blends beautifully with her inverted snobbery; her snarky asides about perfectly nice people and not least her heartfelt belief that size 12 is fat. Even reading her name grates – did the caps lock button keep getting stuck when they made out her birth certificate?

But TiFani is not a heroine, she’s a person. Sometimes she’s a pain in the arse, other times she’s sweet, compassionate and funny – like many real people are. And it’s the compelling reality of the character that is making Jessica Knoll’s novel one of the big word-of-mouth hits of this year.

TiFani is not a heroine, she’s a person.

Back at High School TifAni made a few mistakes. She hung out with the wrong people, she got a crush on the wrong boy and set in motion a chain of events which affected the whole school and still haunt her 10 years on. The wedding has become her way of showing she’s moved on, that she is no longer TifAni but has reinvented herself as Ani Harrison – successful writer on a glossy magazine, wearer of designer clothes and WASP in training. But as Madonna could tell you, reinventions are rarely permanent and don’t really fool anyone. As the wedding gets closer she’s forced to confront what happen to her in the past, and things start to unravel… 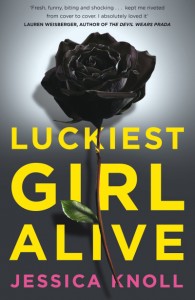 So chances are you won’t love TifAni. But you’ll sit up all night reading to find out what happened to her, whether she’ll get the wedding she deserves and who she decides to be in the end.

When I was a kid I loved Cinderella heroines. I loved the idea that if you were a good person and kept doing the right thing eventually someone would notice and give you a big sparkly tiara and a fancy title. And most of us have never fallen out of love with that idea (otherwise who would have bought Fifty Shades of Grey, ever?) But in the past few years there’s been a bit of an awakening. A desire for real three dimensional characters who we will love, warts, neuroses and all.

That’s how we ended up with Amy Schumer’s Trainwreck character, and Eliza Kennedy’s sexy debut novel I Take You which features yet another driven New York heroine trying to balance love with her unfortunate casual sex habit. Bluebirds do not alight on these women’s shoulders when they get dressed in the morning. They do not sing about how a dream is a wish your heart makes. But they take us to new, entertaining places where women are fully formed human beings with layered, complicated lives. And with women like that, you never know what will happen next.

Luckiest Girl Alive is out in hardback now